A Night to Remember with James Wanless

The “Voyager” deck by James Wanless was one of my greatest discoveries for wellness counseling with Tarot cards. They have just the right blend of contemporary symbolism for clients to relate to effortlessly. Around 2002, as I was writing my first book “Messages from the Archetypes” I felt the need for professional advice in the area of marketing and publishing and so I phoned Dr. Wanless. He was patient and generous with his knowledge and we became easy friends.  He liked the way I intertwined healing modalities in a Tarot counseling session and heartily endorsed my book. After that, we corresponded primarily through e-mail.

In 2010, we had the opportunity to meet face to face when he came to Portland during his professional rounds. We had lunch and afterward he gave me a Tarot session. As I recall, over lunch we discussed a multitude of subjects that were of interest to each of us. However, during the session, because I was the querant drawing the cards, I am sure that he found out more about me than I knew of him.  However, I had used his Voyager cards for many years by then and, because our work is an extension of our selves, felt like I knew James at a deep level. It was like spending time with an old friend…one whom I had just met…if that makes sense.

Two years later, he was making a run through Oregon and I contacted him to see if we could meet up again. To make a long story short, he had time to make an overnight stop at my place. My husband of over 40 years, Lewis Judy, and I invited him to dinner and gifted him with an over-night stay in the Temple of Claire with breakfast in the morning.

When we saw James drive up, Lewis and I walked out the front door onto the steps to greet him. With his cell phone, James snapped a picture of an unusual sight in the dry summer: over my shoulder and off in the distance there appeared a rainbow. It was a beautiful little rainbow starting at the tree tops, shooting upwards, and disappearing into the clouds. Since I see the symbolism in everything, the moist colorful display held a message. For me, rainbows represent loving feelings and relationships. 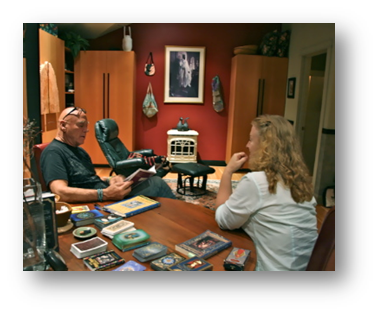 I’ve had more than a few synchronistic experiences with rainbows and because of my particular way of seeing; I immediately thought that maybe the environment was mirroring my feelings of seeing James again.

Lewis, James and I had dinner talking all the while. After a dessert of apricot pie, Lewis stayed in the house to do the dishes (it was his turn). James and I went out to my office-temple where we could look at books, decks, and discuss the state of the world. I showed James my article in Perspective magazine, “Astrology, Tarot, and Maslow” and discussed my latest reviews of my newest book “Gaining Archetypal Vision”, which can be found here. 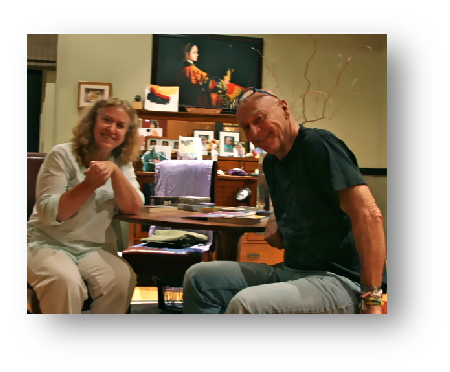 We were talking about the underwear, paint color and art on the wall when Lewis burst in with camera in hand. He began snapping pictures of us from all angles. He got off a number of shots in before I could stop him. I was a little taken aback by his spontaneity and quickly explained to James that “Lewis likes to take pictures.”  I told Lewis, “You should ask permission before you take pictures.” Then, I further explained that Lewis is in the habit of taking candid pictures of family and friends, who aren’t bothered by his creative ritual. 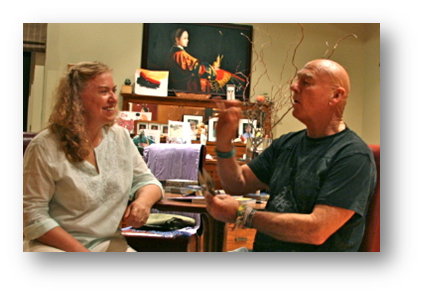 After a short discussion, James agreed to pictures. This brought out the fun-loving child in each of us. First, James thought that he and I should sit closer together. And so we rearranged ourselves a bit and began showing off. In the perfect fool archetype, James grabbed a deck from my table, which happened to be Doreen Virtue’s “Life Purpose” Oracle cards. He chose my card “Infinite Abundance” which stated something about the Universe supporting me as I devote myself to my life purpose. When Lewis felt he had enough pictures he left us…probably to go look at his cache.

When the energy settled down, we began talking about James’ new deck “Sustain Yourself Cards”. He brought the deck out but wouldn’t let me spread it out to look at the pictures. He told me in an honest matter-of-fact way that he didn’t want to just sit and watch me look them over. He found that boring.

I understood that the theme of the deck was based on a philosophy of sustainability. Each Sustain Yourself card is an oracle with a message about Nature and our human survival on this planet. The archetypes are expressed as direction or movement as well as concrete images. Dr. Wanless believes that it is more than necessary, indeed an imperative, that sustainability becomes a dominant lifestyle to ensure our futures and our very survival as a species.

As James held out the large 100 card oracle deck, he told me to “Ask a question of Nature”.

My approach with any deck is from a spiritual perspective because of the synchronicity and flow of intuitive ideas that come from stimulating the archetypes. 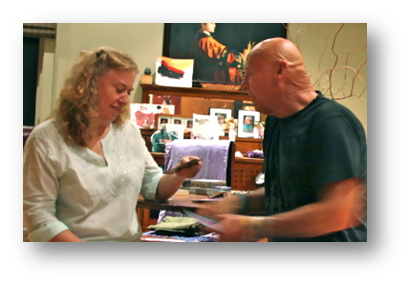 I understood that I was about to speak to Nature Itself and so felt honored for the opportunity. With my heart set on the occasion, my query was about how to approach my relationship with grandchildren in a less mother-hen-type way. The card chosen was “Green Road” and “Path”. The image immediately brought to mind that my life was a path with heart and grandchildren were an integral part of that path. My life is my spiritual path and so when the children presented themselves, I accepted with gratitude. This path with the children teaches many things, but at this time, it is teaching me to live more in the present moment. 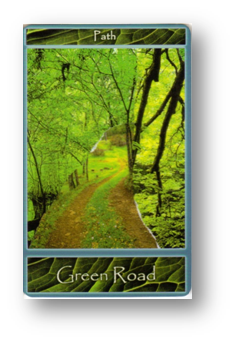 James said a few things but I was lost in thought and so don’t remember his words. (I understand the present moment to include many dimensions of our consciousness.)  Later, I looked his interpretation up in the book accompanying the cards. The passage “Revere and be one with the earth as your church and temple. Nature is your sanctuary, wisdom guide and inspiration.” I loved this. There were some sentiments about the ecology of pure clean energy and resources…Yes, we work at that.  Then I read, “Seek your natural rhythm, uncontaminated by any toxic mental conditioning.” To me this meant that I should pay attention to what I could control and what I can’t. If I can’t have an effect, then I should not worry about what grandchildren are doing or not doing. Once more, I made the commitment to detach and stay in the Now.

In the morning, as James, Lewis, and I were at our round breakfast table, Sara, our daughter and the children came in to start the day. Sara joined us at the table and the kids found something else to do. The conversation was pleasant with lots of ideas still flowing. Finally, I gave James a two day supply of fresh apricots to take with him as we bid him adieu.

That was Friday morning.

Later, Lewis and I had an avalanche of company and things to do. We entertained until Saturday evening. We were tired but satisfied that we had done our best to work at the higher energies of consciousness (also known as gracious living). I was ready to relax. I sat in my favorite spot in the living room and picked up James’ new oracle deck. After a careful study of the cards, I find they satisfy both the intuitive feminine feelings in imagery but also the masculine linear mind for information.

Exhausted but happy, Lewis and I were looking forward to Sunday because we like to take one day off a week, just to give our multi-dimensional selves a break. I was feeling the energy of the let go, when I drew a card. I was immediately struck with its accuracy.  I laughed and called Lewis, from the other room, to come look at the card. He said, “Just a minute, I will get my glasses.” I told him, “You don’t need your glasses, come look.” He took one look at the card, which was entitled “Nothingness” and “Openness” and the white blank page. He laughed, hugged the card to his breast, rolled his eyes heavenward, and loudly stated, “YEEEESSSS!”

Then, I looked up the Wanless interpretation and related to this: “Give yourself space and call for a time-out, go blank with no agenda, with no plan.” Yes, indeed. 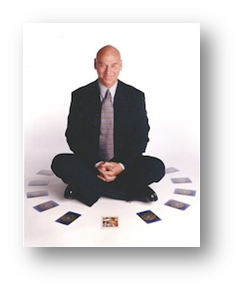 James Wanless, PH.D was a distinguished university professor in the Middle East when he experienced a life-threatening disease which led to a spiritual transformation.  He relinquished his academic career and began to share his new found wisdom and inspiration.

James Wanless is a futurist and pioneer of new thinking and recognized for weaving timeless wisdom into modern life with intuitive tools and symbolic systems. He is the noted creator of the best-selling modern classic, “Voyager Tarot” and the author of “Way of the Great Oracle, Strategic Intuition for the 21st Century” “New Age Tarot”

and “Wheel of Tarot.” In addition to his “Sustain Yourself Cards,” he is the author of the classic “Little Stone: Your Friend for Life. James is a master tarot reader with over 30 years’ experience. You may reach Dr. Wanless at www.voyagertarot.com