As a concerned alumnus, I revisited the web site of the Institute of Transpersonal Psychology (ITP) to see where things were in regards to its transition that includes a name change to Sofia University. Apparently, change was permanent because there it was on the web as Sofia University. On the same page, James Fadiman’s name appeared as the founder of the school. I recognized his name as being one of my Facebook friends as I see his posts on my newsfeed from time to time.  Facebook has a cool feature, a place for sending messages.  With a few clicks, you can contact any of your Facebook friends and leave a message. Like an archetypal fool, I spontaneously contacted Dr. Fadiman to ask about the change. This is how the conversation went:

Dr. Fadiman responded: “Sophia University it is. Already enrollments are up, especially in the PH.D. program which had been slipping as well as most of the masters programs. We have been approached by universities in China and Switzerland for student/faculty trades and close affiliation. It looks like being the “first transpersonal university” was a good decision. How does that sound to you?” 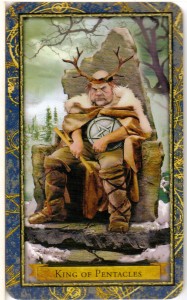 Still in fool mode, I bluntly told him I didn’t like the change and asked: Why a Goddess name? I was also curious as to why the name change would affect enrollment. Dr. Fadiman wasn’t aware of it being a Goddess name and instead told me the name was selected because it was a Greek name meaning wisdom and an Arabic word meaning beauty. He carefully explained that enrollment was up because people would rather attend a University instead of an institute, and because the word institute rarely means a place to get a graduate education. He also reported that the name change was the most trivial part of the expansion and upgrading that was under way. “For openers,” he said, “we are doubling the physical size of the school.” Then he said, “As so many former students were sure that the name change would destroy the school forever, it is nice to see what is actually happening.” and happily wrote “Bob Frager and I see this as finally moving ahead on our larger and original vision.” Lastly, he asked if I was coming to the festivities in October to celebrate the changes. “Bob and I will be doing an event called, Extending the Vision on the 18th of October. The Official event will be on the 19th, both probably in our new Auditorium next door to the current campus.”

“Sophia is the Gnostic Goddess, who is God’s other half.” I complained that I and others had been working hard to get the transpersonal concepts out into the world. Why not change the name to something with the words transpersonal and university in it. But, not one to carry on and stick to my guns when there is nothing more that can be done, I signed “Oh, well, change happens.” Then I told him that I can’t travel much due to the recession and mentioned the Bay Area Tarot Symposium where I will be a presenter.

James wrote back, “Right you are. I always forget that monotheistic Christianity has a few Goddesses’ tucked away in odd corners.” He was sorry I couldn’t attend the schools festivities and thought the conference I was attending sounded great. He continued, “I assure you that the transpersonal is not being lost but actually will no longer confined to “psychology,” a word with a lot of connotation’s about other things. Bob and I never intended it to be limited to psychology, but we had to start somewhere.”

Not one to be deterred easily, I said, “How about the “University of Transpersonal Studies” which, “I” thought was much better suited to the school and its subjects. I continued, “Sophia is not a Goddess tucked away in odd corners…she is quite prominent in history” and corrected, “I believe that Gnostics are Gnostics and not Christian, although, the first Christian church was founded by Gnostics who were going against the grain.” Then I relented, “Well,” I said, “I shouldn’t criticize because I am not there and doing the work.” I felt a final shift of a let go and said, “Good luck on your endeavor.”

James responded, “We are all doing the best we can. Your idea was one of those considered by lots of people and didn’t make the final cut. Let us pray to Sophia for wisdom and let the rest of the work be done by them who are paid to do it.” Then he asked, “Did you do a Tarot spread to see what ITP/Sofia will need from you?” He went on to reminisce about a reading he did for a woman who later became his wife. He said, “Powerful stuff in them little decks” and then admitted that he is “often the Fool flying off that cliff.”

I wrote back that, the little deck was indeed powerful and that I use it in wellness counseling that usually guides people to consult their higher Nature and that it was, indeed, quite empowering. I also said that I knew the Fool archetype well, that is why I ended up as an ITP student. I also took his advice and did a Tarot spread and asked the question suggested. I used “Wizards Tarot” deck by Corrine Kenner.

An hour later, I reported the results of my reading to James:

First card, Past: King of Pentacles a rather grumpy looking King, which I thought was me about the name change (see picture above).

Second card, Present: 4 of Pentacles (reversed). This was me willing to accept the name change and move on. 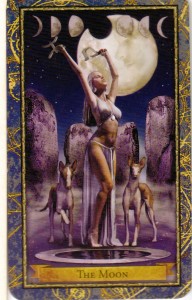 Third card, Future: Moon of the major arcana. The author’s interpretation was read after I gleaned any intuitive hits from the image on the card. When I read her interpretation, certain things stood out. The woman on the card was called “Professor of Lunar Magic” that embodies the qualities of the maiden, mother and crone. Even though she is ready to give birth, her hair is silver (That’s me. Except for the long lanky sexy look and those shoes would kill my feet.). In her right hand is the talisman for Pisces (my rising sign) representative of intuition and psychic ability. In her left hand is the Hebrew letter goph which means “the back of the head” a reminder, according to the author, that things can be felt and not seen. The interpretation also prompts one to be aware of the shadow side of the moon. A concept that must be kept in mind at all times.

Because my moon is in the 10th house, I felt reminded that, indeed, I’m here, at this place and time, to be a teacher of lunar magic.

This felt incomplete for the question and so I drew the next card: Ace of Cups, which I understand to be the purest aspect of heart.

I wrote to my friend about the spread and then wrote, “I guess what ITP/Sofia needs from me is love.”

Jim liked the reading and the answer and likened my statement to a popular song with a similar refrain: “All We Need is Love”.

He went on to write about his adventures into LSD therapy sessions and his use of the Rider Waite Smith deck. “At the end of the sitting for someone LSD therapy session, when they were about to go home, I’d give them one Tarot card and ask them to tell him about it.” I wondered if he had recorded the reactions of people, on LSD, to the card images. I would love to read about this!

When the conversation felt done, I drew a card from the “Sustain Yourself” deck by James Wanless. I drew “Purification” also entitled “Creative Chaos.” Perfect. The card is about questioning everything and doing things in an un-premeditated and unpredictable way…just like this conversation. The image on the card depicted letters flying off one page and into space….probably the internet where they would compose themselves again on the other end. The accompanying little book counsels the querant to “get out of your mind and follow the spontaneous impulse. Acknowledging your body and its feelings and its crazy wisdom—the genius of the fool.” Somehow there was a spontaneous harmony, a creative chaos to the exchange. I felt listened to and I was ready to move on.

James Fadiman, B.A. (Harvard) M.A., Ph.D. (Stanford) has held a variety of teaching consulting, training, counseling and editorial positions. He has taught in psychology departments at Brandeis and San Francisco State, design engineering at Stanford, and for the past three decades, at the Institute of Transpersonal Psychology that he co-founded. He has written textbooks, professional books, a self-help book, a novel, and a series of videos, Drugs: “The Children Are Choosing” for National Public Television. His books have been published in 8 languages. He had had three solo shows of his nature photography. He sits on two non-profit boards as well as having been the president of several small natural resource companies. He has been involved in researching psychedelic experience when it was legal and subsequently and recently published “The Psychedelic Explorer’s Guide: Safe, Therapeutic, and Sacred Journeys”.

Also see this article about James Fadiman “The Heretic”.