Robert Volkmann and Me

In the late 90s, I opened a Wellness Center and then began looking for others with whom to connect and network. Robert and I met at an alternative practitioner’s gathering. He and his wife Diane had an interest in meeting others of like-mind. Robert was a physician and Diane was finishing a degree in massage therapy. This fit nicely with my own orientation as a registered nurse, but what really interested me was that, like me, Robert worked with his dreams and experimented in altered states through meditation. He was also an extraordinary astrologer. 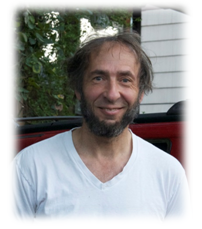 Living in rural Oregon has its benefits but, people who study the esoteric arts are few and far between. Sure, I had read many books by great authors in religion, philosophy and psychology but I knew no one in this area who understood our world the way I did; Let alone worked with their dreams and took trips into their unconscious mind to explore the images and feelings there. I was also a budding astrologer and he was already accomplished in that area. Of course we continued to connect and resonate with each other, e-mail and phone conversations. The relationship has never been of the romantic genre, but one of shared interests and discoveries.

In one shared exploration with a psychic channel, we were told that we had been in four lifetimes as sages in the Orient. The past life pattern was showing up this incarnation as well. We talk for hours on the phone and in person about personal explorations and we e-mail frequently. Whatever the reality, after over a decade of communiques, we continue to explore our worlds together. 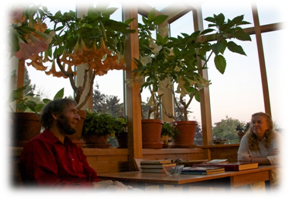 In my book “Messages from the Archetypes” I wrote about our continuing e-mail work with dream interpretation. We enjoy exploring the astrology of the moment, individual birth charts and he works with astrological progressions, which I can’t wrap my mind around but find it interesting just the same. Another big plus is our medical/scientific backgrounds give us even more territory to cover and a common foundation for our intellectual work together.

Robert’s sun in Virgo and my sun in Gemini are in positions that form a square angle. It is thought that this position is difficult and we have found that to be so. In the beginning of the friendship, it was difficult for us to communicate and be understood. We haggled over definitions because we used entirely different terminology. Thus we spent a lot of time discussing perspectives and trying to understand what the other was saying. Even with this handicap we enjoyed our intellectual meanderings. Nowadays, we have formed a common vocabulary and it is much easier. One way that you can tell the relationship is more synchronized is that Robert has stopped e-mailing me in all capital letters, a sure sign that he was annoyed.

With a lot of earth in our natal astrology, Robert and I also like to garden outdoors and each of us has a large collection of indoor plants. We have different kinds of plants in our houses….of course. 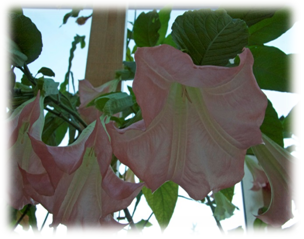 The first time Robert showed me his Angel Trumpets, the sight of their striking beauty and the aroma sent my senses soaring. They exuded the most angelic of energies and I was instantly transported to a higher feeling state. Robert gave me a special small plant of my own, but because I’m not good with highly sensitive plants, it died. With a natal Venus-Mars conjunction in Taurus, I love Mother Nature and resonate with plant life and working with the bounty of colorful herbs and flowers. Robert knows how I love the Angel Trumpets and he tells me when his are about to bloom. At that time, I go to his house to be transported into heaven once again.

Pictures are worth more than words. I have included pictures that Lewis and I took of Robert and his Angel Trumpets. 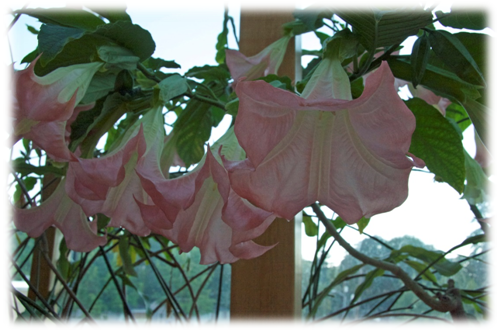 Photo credits: Robert portrait and Robert and Toni in conversation Lewis Judy and the Angel Trumpet pictures by Toni Gilbert (2012)

1 Response to Robert Volkmann and Me